The Story Behind “Breaking The Hex” 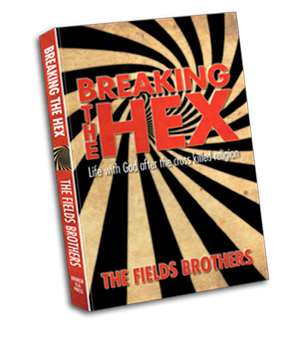 how this book came about

(from the best of our memory)

Roger’s wife, Lori, had been asking him for some time to write a book about Jesus love for us. She wanted something simple that even non-readers would pick up and enjoy. “I want something edgy,” she would say, It has to catch your eye, draw you in, keep your interest,  Roger resisted. “Writing is hard work,” he complained. She continued saying, “I know God wants this for His children to help them know that He loves them and that they don’t have to work for it or earn it.” She wanted this as a written legacy for her children, something they could hold in their hand to remind them of Gods love when things get tough.  Finally, God put it on Roger’s heart to pursue it on one condition: that his brother, Jeff, would write it with him.

One day in the spring of 2016 Roger called Jeff and said something along the lines of “I have a project for you. I need you to write a book with me.” Without hesitation, Jeff agreed. Both were motivated to leave a written legacy to their children and grandchildren concerning what they believe about life in Christ.

Roger and Jeff had been having conversations for several years about how they had arrived at a new understanding of how grace works on this side of the cross. They came at it from different vantage points spiritually but arrived at the same conclusions. They were ready to write it out. But there was a stipulation.

They both felt like too many Christian books were like Mexican food, the same stuff wrapped up in different ways. They wanted this book to be different. They wanted it to look different and sound different. It had to be unique.

After scores of conversations and hundreds of hours, “Breaking The Hex” was born. They hope it gives you a lift and a laugh or two.